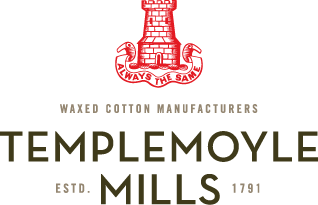 latest from
THE MILL
HERALD

BARRY CORRIGAN’S ACQUISITION OF THE COMPANY

After the purchase of the company from the Dinsmore Family by current managing director in 2007, the following seven years have witnessed a substantial impetus to further diversify the business. With an investment of £1.1m in a new production facility, partly funded from the European Regional Development Fund, Templemoyle Mills has been equipped to grow and display prestige in the textile industry. We have added a variety of finishes to our existing dyeing and finishing business, such as flame retardant, water repellent, anti-bacterial and now wax coatings. These innovations in recent years have been recognised with accolades such as Exporter of the Year presented by the regional business awards in 2012 and 2013, with the Business Growth Award also achieved in 2013.

We are delighted to announce that we have just been presented as winners for both awards this year 2014!

OUR HISTORY OF CRAFTSMANSHIP GOES AS FAR BACK AS 1791. IT IS THE FABRIC OF OUR BUSINESS. WE COMBINE THE KNOWLEDGE AND EXPERIENCE GAINED FROM STUDYING TRADITIONAL METHODS OF COTTON WAXING, WITH NEW INNOVATIONS AND TECHNOLOGICAL ADVANCES IN THE INDUSTRY. WE CONTINUALLY TEST AND REFINE OUR PRODUCT, ENSURING IT MATCHES THE HIGHEST STANDARDS OF QUALITY, DURABILITY AND PROTECTION FROM THE ELEMENTS THAT ARE ESSENTIAL FOR A WAXED COTTON MATERIAL.